There was this sound.
Sounded like a cord knock.
Couldn’t figure out what it was.
Every recording, no matter how I changed the setup, it was there.
Tried everything, including wrapping cords with old dishtowels and socks: 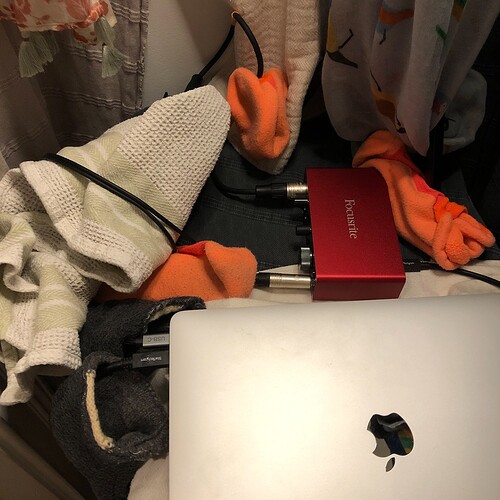 Many times the knock came right before a word, which was an easy edit. Most times it came in the middle of a word, and then I despaired because I haven’t been able to fix it with spectral delete or high-pass filter (or low-pass, for that matter).

In this week’s edit, there was a word I emphasized twice and the knock happened right before I said the word, both times. The word was: chocolate.

Because it happened in the same way on the same word, it revealed the source: me.

The sound was coming from my jaw.

I wear a headset with a mic and it was picking up internal noise from my temporomandibular joint (TMJ).

Off to Sweetwater to get a regular mic…

@Rob as a dentist, I thought you would find this interesting.

I thought maybe it was ghost of Auntie June warning against too many sweets.

I’ve been mucking around with a ‘live’ or face to face recording kit. I bought the cheapest lav mic (Boya M1) and plugged it into my USB interface (focusrite Scarlett 2i2) and it was generating this awful hum or EMI.

I picked up a new adaptor (Rode VXLR+) and hum gone!

Not as impressive as the TMJ clicking but I miss talking tech y’all!

I do @JuleKucera
As my lips continue to lengthen with age, lip smack is the main problem I get!
I managed to settle my tmjs down a while back, otherwise I suspect I may have had the same issue, especially with my Pre-Mix 6.
Cheers
Rob

@Rob I hear you on the parts of the head that continue to lengthen–even earlobes!

@Elisa Graf recommended Nic Redmond’s podcast. She has one on mouth noises that includes lip smacks: 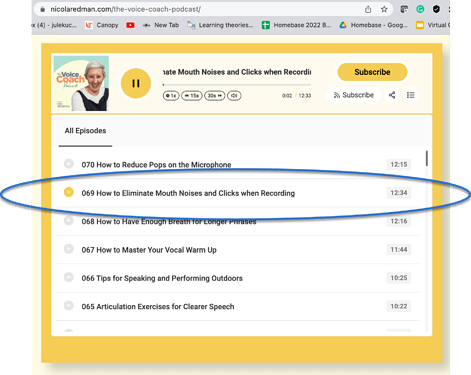 Are you even hearing my earlobes @JuleKucera

Just joshing!
I’ll have a listen but the longer the lips get, the more I might need lip splints!
The only ones that really annoy me are those that appear just at the start of speech. Must be the lips glueing together mid speech.
Filling the mouth with cotton wool really helps but no-one can understand what I am saying unfortunately.

@rob you are hilarious. And the smack at the start of speech is lips gluing themselves. Lip balm to the rescue!

Hi Jule
A good dowsing of the head in Olive Oil is helpful and pleasant too @JuleKucera !
Raced Ironman Staffordshire last weekend, so episode 101 is a run through of the trials, tribulations and nightmares of race day. My fist was in my mouth at 4.45 am, panic stricken!
I hope you are now committing to Pickleball as per your coach’s advice!!
Have a great weekend
Rob

Hi Rob,
Was in a pickleball clinic this morning and in a game Friday morning. Move it or lose it!

Just back from running a course for a few days.
Hope the game went well!

Wow! What a discovery!

Very randomly about 20 years ago in a rehearsal the guest speaker we had that day said there had been a new paper released that proved that the jaw is connected to the hips, and recommended hip openers. Thus loose hips = a loose jaw. Another (singer) friend of mine tried this about a decade ago when his jaw tightened up and it worked.

Nicole, that’s a wild idea!
I have tight hips so I’ll try it. (It’s all about stress, isn’t it?)
Thanks for the tip

Rob, the game was fun and the team I was on won twice!

What a great story, deftly unfolded. It could be an episode on “Radio Mystery Theatre.” Very smile-invoking

Thanks for sharing that!

for a long time!
Glad you liked the story

It’s a wonderful story, and please know that I certainly didn’t intend to belittle the anguish you endured as you sought to solve the mystery

“I Lost Everything,
I Have Found Myself.”

Ron, I’m sorry that I came across as though I might felt belittled. I did not. I felt seen.

And you’re right about the looked everywhere only to find it was me. That’s exactly the kind of story it is!

Great thread. So, what Mic did you buy?

Bruce, it’s a SHURE SM58. I pretty much have to go with SHURE becasue I used to live about a mile from their headquarters (loved their modern building in a sea of mid-century not-modern architecture).

Also, the new mic motivated me to overhaul my podcloset, realizing that no contractor was ever going to show up for a job this small and that yes, I could do it myself. 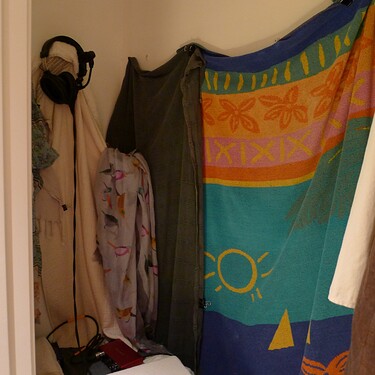 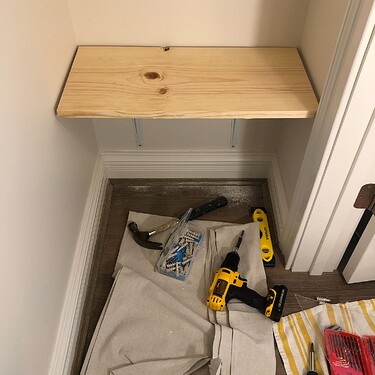 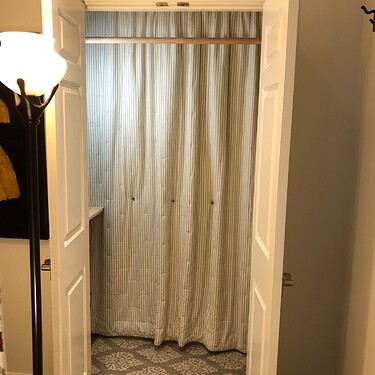 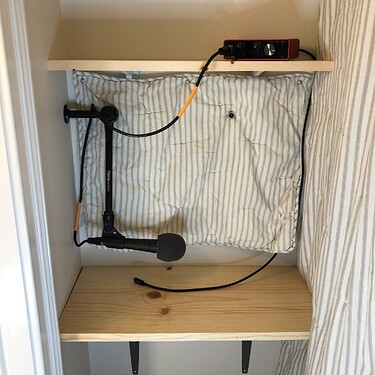 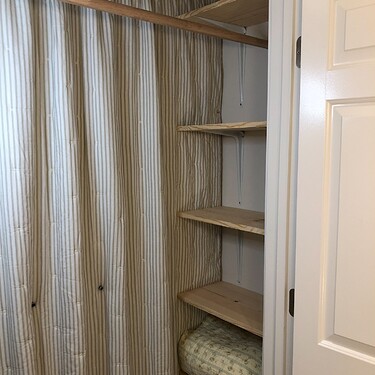 The bedspread on the bottom shelf gets hung over the doors on the inside. I want to change the mic set up because as is, it depends on a stuffed animal to stay in the right place.